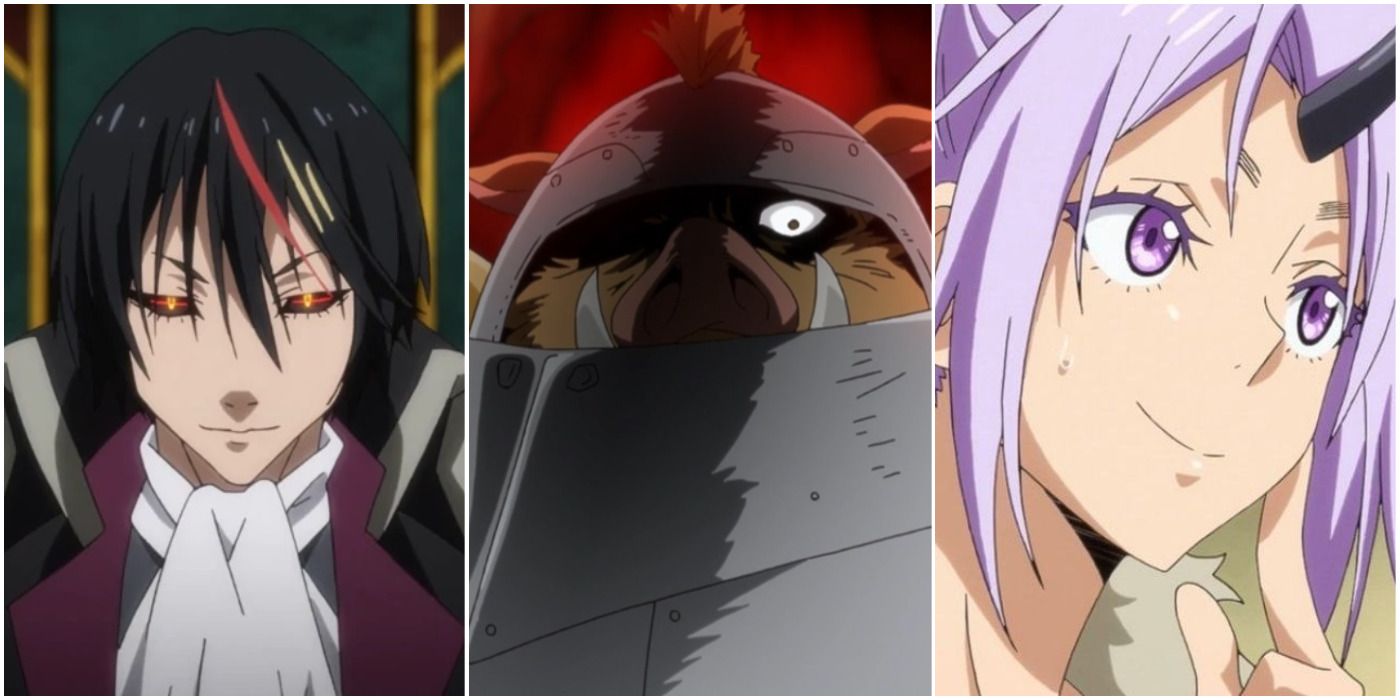 That Time I Got Reincarnated as a Slime tells the isekai tale of Rimuru Tempest, a blue slime in a new world. His mission: to unite the feuding monsters of the Jura Forest into a new nation of tolerance and peace, and then forge diplomatic ties with older, more established kingdoms. To get the job done, Rimuru needs more than his own abilities. He needs allies.

One by one, or in small groups, Rimuru recruited countless allies and friends to his cause, and his circle of friends and allies is remarkably diverse, from orcs and Japanese-style ogres to goblins, dire wolves and more. His allies can be ranked according to influence, personality or simply raw combat strength, and when it comes to sheer power, a few of Rimuru’s allies rank among the world’s strongest characters of all. Who are they?

Shion is one of the few survivors of the ogre tribe, and she volunteered to become Rimuru’s secretary and bodyguard soon after getting her name. Shion isn’t quite as powerful as Benimaru or Hakuro, but her combat strength is still impressive, and more than sufficient for most small-scale fights.

Shion wields an oversized sword in battle, called Hercules, and she can also fight barehanded, such as in that duel against Suphia of the Beastketeers. She can also charge up and fire energy attacks for ranged combat.

9 Geld Is A Tough But Humble Orc Commander

Rimuru’s orc ally, Geld, was named after the bloodthirsty original Geld, who had become the Orc Disaster. Fortunately, this new Geld is much more benevolent and constructive, and he works tirelessly for the benefit of Rimuru’s new kingdom, along with his fellow orcs. He’s not afraid of a fight, either.

Geld has impressive strength even by orc standards, and he demolished Shogo the Otherworlder with ease. In particular, Geld relies on his natural endurance, steel armor and hardened shield in battle to outlast his foes and grind them down.

8 Souei Is A Bonafide Ninja

This isekai world has few ninjas, but an exception is Souei, one of the few surviving ogres. While Shion and Benimaru fight as traditional sword masters, Souei sticks to the shadows and uses deadly tricks and tools to take down even stronger foes. He can also teleport and make clones of himself.

This puts him roughly on par with Benimaru and Hakuro, though he’s not quite as destructive in battle. On the other hand, he is highly useful as a spy and scout, and Rimuru regularly sends Souei to gather intel and report back, often via teleporting clones.

7 Hakuro Has Been Practicing With The Sword For A Lifetime

Hakuro is the eldest of the surviving ogres, and despite his age, he is quick and tough on the field of battle, allowing him to keep up with younger and more energetic foes. He also has the benefit of many years of experience, which is why he elected to teach an entire class of students on the way of the sword.

Hakuro can take on Falmuth’s powerful Otherworlder champions and win, and in a traditional sword duel, no one can hope to best him. His destructive output is formidable, but Rimuru has even stronger allies.

6 Benimaru Is Stronger Than Ever

By now, Benimaru ranks as the strongest ogre of them all, even if he lacks Hakuro’s extensive experience in battle. Benimaru has learned well from Hakuro, and his immense natural strength and raw talent are enough for him to slightly surpass his elder. Hakuro is so proud of him.

Benimaru easily destroyed a partial Charybdis while battling Clayman’s army in Eurazania, and he can hold his own in a sword fight, too. If that’s not enough, he can also use fire-based magic in battle, and resist the enemy’s own fire-based magic.

5 Ramiris Is A Petite Demon Lord

Ramiris is one of the Demon Lords, though she ranks as the weakest of them all. Still, the tiny fairy Ramiris is a loyal friend of Rimuru’s, and her new golem, Baretta, is equally faithful to Ramiris and her creator, Rimuru himself. Ramiris wanted so badly to help Rimuru fight the villainous Clayman during Walpurgis, but ended up sending Baretta instead.

Ramiris is vastly powerful simply by dint of being a Demon Lord, meaning she outranks any of Rimuru’s non-Demon Lord allies by default. She can wield a wide variety of magic spells, but she doesn’t typically engage in melee combat. Due to her size, she’s not much of a martial artist.

Demon Lord Carrion runs the Animal Kingdom of Eurazania, and at one point, Clayman sent both Milim and Frey, fellow Demon Lords, to attack him. Carrion couldn’t defeat both of them alone, but he tried anyway, and to his credit, he survived this brutally unfair fight and met Rimuru again at Walpurgis.

Carrion can soar on his eagle-like wings and engage in melee combat against his fellow Demon Lords, and against most other foes, he would achieve victory with effortless ease. Good thing he’s on Rimuru’s side.

3 Veldora Is A Reborn Storm Dragon

During his heyday centuries ago, Veldora was a hugely powerful storm dragon, but then the masked female Hero sealed him away in that cave near the Jura Forest. He allowed Rimuru to gobble him up via Predator, and was later reborn in a human body of his own.

Veldora is now much smaller, but no less powerful than before, and he enjoys being free once again. He can stand up to Demon Lords with ease and enjoys fighting, but he also loves Shonen Jump. He even cried out “Kamehameha!” during a fight.

It’s true that Milim acts rather bratty and immature for her age, but Rimuru can put up with that, and more importantly, Milim Nava is massively powerful and a good friend of Rimuru’s. In fact, Milim ranks among the oldest Demon Lords of all, and she knows the strengths and weaknesses of most other Demon Lords.

Even Rimuru doubts that he can defeat Milim in serious fight, so he keeps her happy with snacks and fun activities, and so far, it’s working. Milim is carelessly destructive at times, but she’s committed to Rimuru’s cause, and views him as her “bestie.”

1 Diablo/Noir Has Practically No Equal

Little is known of this ancient demon, but he does rank among the Primordial demons, meaning he is among the strongest beings in this entire isekai series, and definitely Rimuru’s most powerful ally of all. He doesn’t often get a chance to prove it, though, since he’s more interested in housework and secretary work, like Shion.

Still, Diablo’s few fight scenes make it clear that he can effortlessly blast away even the strongest foes without taking them seriously, and it’s fortunate that Rimuru has Diablo on his side as a loyal follower, rather than a rival or enemy. Not even Rimuru or Milim could stop him if he went rogue.

Next: Reincarnated as a Slime: 5 Great Role Models in the Series (& 5 Bad Ones)

Next 10 Amazing Anime Characters Ruined By A Single Moment

Louis Kemner has been a fan of Japanese animation since 1997, when he discovered Pokemon and Dragon Ball Z in elementary school. Now he’s a bigger anime/manga fan than ever, and is ready to share what he knows with readers worldwide. He graduated high school in 2009 and received his Bachelor’s in creative writing from UMKC in 2013, then put his skills to work in 2019 with CBR.com. He’s always looking for a wonderful new anime to watch or manga series to read. You can reach him at [email protected]